On January 28, 2022, the Forbes Avenue Bridge collapsed hours before president Joe Biden was supposed to come to Pittsburgh and talk about his new infrastructure law. People became more aware of what was going on and then discovered that there was a Pittsburgh transfer bus hanging on the bridge at a 45-degree angle, and a pickup truck with a crumpled front end was sitting on top of the collapsed bridge deck, along with a black sedan and two other overturned cars.

Joe Biden ended up meeting with the police and greeted them by saying that they deserve a lot of credit for what they do. Joe Biden also mentioned how he has been to Pittsburgh many times, and that it has the most bridges in the world. The officials said that they weren't quite sure if the collapse happened because of the explosion in the gas

line or that the gas leaked after the bridge collapsed because there was a smell of gas lingering through the town.

Ten people ended up being injured but not in critical condition. Three people were transferred to UPMC Presbyterian hospital for treatment, one person was transported to UPMC Shadyside for treatment. Witnesses say that the sound of the bridge collapsing was like little planes crashing into the bridge.

In order to be able to repair the damage of the bridge, it would cost about 23.5 million dollars. 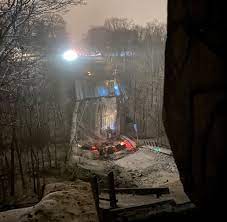 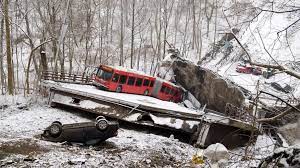