“When it comes to war, ideology will always take a backseat to momentum.”

Can you train for it?

Can you defend against it?

The textbook definition will tell you momentum is easy to calculate.

But sports aren’t played in textbooks. They’re felt in the emotions of our soul and move us, often against rational thought, to do great and miraculous things. Sports doesn’t calculate momentum. It feels it.

Scott Slayton took over the Red Land basketball program in 1998. As all coaches tend to do, they assess the hand they've been dealt. As newly hired Scott Slayton looked to the middle school ranks, he couldn’t help but count his blessings.

But below them, in 7th grade, Slayton had more reason to get excited. That’s where Mike Cox and Robbie Agnone roamed. Agnone was even referred to as “The Franchise.” The expectations must have been palpable.

“The impact the Red Sea had on games was huge. It was insane. You’d see them enter, single file, and it was this never ending line. It would take a half hour for all of them to get in the gym.”

"When you called and asked me what I remembered about the game, all I could think of was what happened before the game. I think we won by something like 12 but I can't remember any specifics. I remember I came out of the locker room right as Wallenpaupack entered the gym. You have to understand, they travel really well too. Scott (Slayton) and I went and saw their district championship game against Hazelton and the gym was packed. So, it's not like they didn't expect a big crowd. But, when they walked in and took a glance up at what we showed up with, I think they were in awe."

The brain has a funny way of sorting what it chooses to remember. It holds on dearly to those emotional things and it allows the routine to fade away. At this point in the season, routine was a long and deep bench beating their opponent with tenacity as much as skill. Although Robin Summey took scoring honors this game, it just as easily could have belonged to Agnone, Cox, McCullough, Lechthaler or Shewell. The game went according to plan. Slayton's 10 man crew attacked with relentless pressure and took advantage of the opportunities as they presented themselves. The specifics of the game were simply too hard to recall. Red Land 54 Wallenpaupack 42 seemed to be the subplot.

Spend some time with Scott Slayton and you'll quickly realize what really drives him is "the climb." I might even venture a guess and say the pain and suffering the climb provides fulfills him. Scott Slayton loves a good challenge. If it isn't hard, he doesn't want any part of it. This was Red Land's first ever state playoff game. The job that Scott Slayton accepted back in 1998 wasn't a sure thing. It was the epitome of a challenge. But, that's exactly how he wanted it. And now, 5 years later, the climb was starting to show some real distinct fruits of his labor. Red Land had reached the state tournament. Coach Slayton allowed himself a brief moment to enjoy the view smack dab in the middle of the climb.

"It was right out of Hoosiers. It was exactly how I pictured a state playoff game would be. We had a huge caravan of fans coming to support us."

The caravan was coming to support the Red Land Patriots; owners of a 23-5 record. But, make no mistake, the Red Sea was also coming to participate. This sea of support wasn't a cross your fingers and hope for the best kind of support. It was an aggressive in your face style that was new to the school. Never before had a mass of people become so proactive in cheering for high school sports. The Red Sea created the atmosphere. The Red Sea was that collective teenage bravado that was smart enough to know what inappropriate sounded like but brash enough to always seem to brush right up against it.

"Mike Cox, who would obviously go on to a notable football career, was the not-so-tall-but-beefy space eater down underneath, the guy who did the dirty work, boxing out, grabbing boards, scoring on put-backs. When he did something impressive, the Red Sea serenaded him: "We... have... Big... Cox! We... have... Big... Cox!" I mean, how do you beat that? And what could teachers and administrators do? They were literally saying his name with an apt description of his front-court presence."

Despite the raucous and rowdy crowd, Wallenpaupack held a 22-21 lead in the second quarter. According to Patriot News reports, Robin Summey then nailed a 3 pointer that put the Patriots up for good. Mike Cox scored 12 and Robbie Agnone contributed 10 more and that seems to be all anyone wanted to share with in game particulars. General observations like "tenacious defense" and "deep bench" were offered up as reasons for the Patriots victory. Wallenpaupack leading scorer and future Lock Haven basketball player Darren Cannon was a little more specific.

"They beat the pants off us. I remember it was really hard to scout teams at that time. But, I had played with some of those guys on the AAU circuit. Even during warmups I could tell that they were physically stronger than I had remembered. I also remember how tenacious they were on defense. One guy in particular jumps out for me. He was the 1 or the 2 guard (later revealed to be Robin Summey) and he was just tough as nails. He made everything difficult for us." Darren also later added "They seemed to have a core group of guys that knew how to play together and you could tell had played together for a long time."

Maya Angelou was famously quoted as saying "People will forget what you said. People will forget what you did. But, people will never forget how you made them feel." Discuss Red Land basketball with any Red Land fan during the early part of the century and they can't help but smile. It was a fun and exciting time. It just felt good. Derek Lechthaler and Mike Cox played against taller front courts but you always felt they'd find a way to outproduce them. You felt that Agnone would make a play with the ball in his hands late in the game. You felt the emotion that the backcourt played with. You felt Andy Stoner's youthful exuberance. You felt Brad McCullough's "find a way" style. You felt Nick Shewell's confidence behind the 3 point arc. Most assuredly, you felt the swagger of Robin Summey.

My lasting memory of this group of athletes and this time period for Red Land basketball was simply SPECIAL. Red Land winters were fun. Scott Slayton, Bill Vacchiano and Chris Cowoski were friends and coached like friends. They were going to laugh and they were going to have fun. The players picked up on that vibe and played with the same spirited energy the staff demonstrated. There was an edge to their style of play. They respected the game and they respected their opponents but they weren't about to be told "how" to play the game.

Other notes and quotes....

"They were a very good team. The gym at Scranton was packed and we were coming off only our 2nd district championship at the time in school history and were looking for our first state tournament win. But it was a great environment and something I will never forget... I often think about that game."

"Spring sports had started and I remember practicing at New Cumberland Middle School. They gave all the gym time to spring sports."

Andy's quote speaks to exactly how unprecedented this state playoff appearance was.

"We played Hempfield in the first round of the district playoffs. Red Land played after us. Coach Sload seemed more concerned that the Red Sea would be at our game than the actual opponent. But, believe it or not, before our game ended they were chanting "You're not Mid-Penn." It felt great being on their side for once."

"Colonel Innerst and I would get that We Are...Red Land chant going before the game with the Red Sea. We'd fire t-shirts up into the crowd too."

"I was the leading scorer (after the regular season) because we were always up in the 4th quarter. They'd inbound the ball to me and teams would foul me and I'd pad my points."

"You have to understand, we're a rural school. I honestly believe the crowd's energy, aggression and attitude intimidated some of our guys."

"When I moved to the area, I coached a Little League team in at New Cumberland. My son was 12 but I drafted a 10 yr. old Robin Summey with the first pick."

"Doug Dyer was the perfect example of buy-in. Every time there was a dead ball on offense he was coming out of the game. But, he would absolutely lock onto guys on defense. He had to be the most annoying player in the league."

"I remember seeing Coach Slayton at Culhane's one time. I think he was with Cowoski and they were diagramming plays with the sugar packets. He was always thinking basketball."

"Years later, I helped organize and run the first student-section showdown at The Patriot-News. That first year my colleague John Tuscano and I ran that contest, it was a lot of fun. The schools and student sections really got into it. By that time, though, some of the teeth for these student sections had been dulled by administrative rules and policies. The Red Sea, if I recall, fared decently in the contest, but Northern Lebanon, of all schools, ended up winning the contest. I remember thinking, if this contest occurred during the early 2000s, the Red Sea would have won in a landslide." 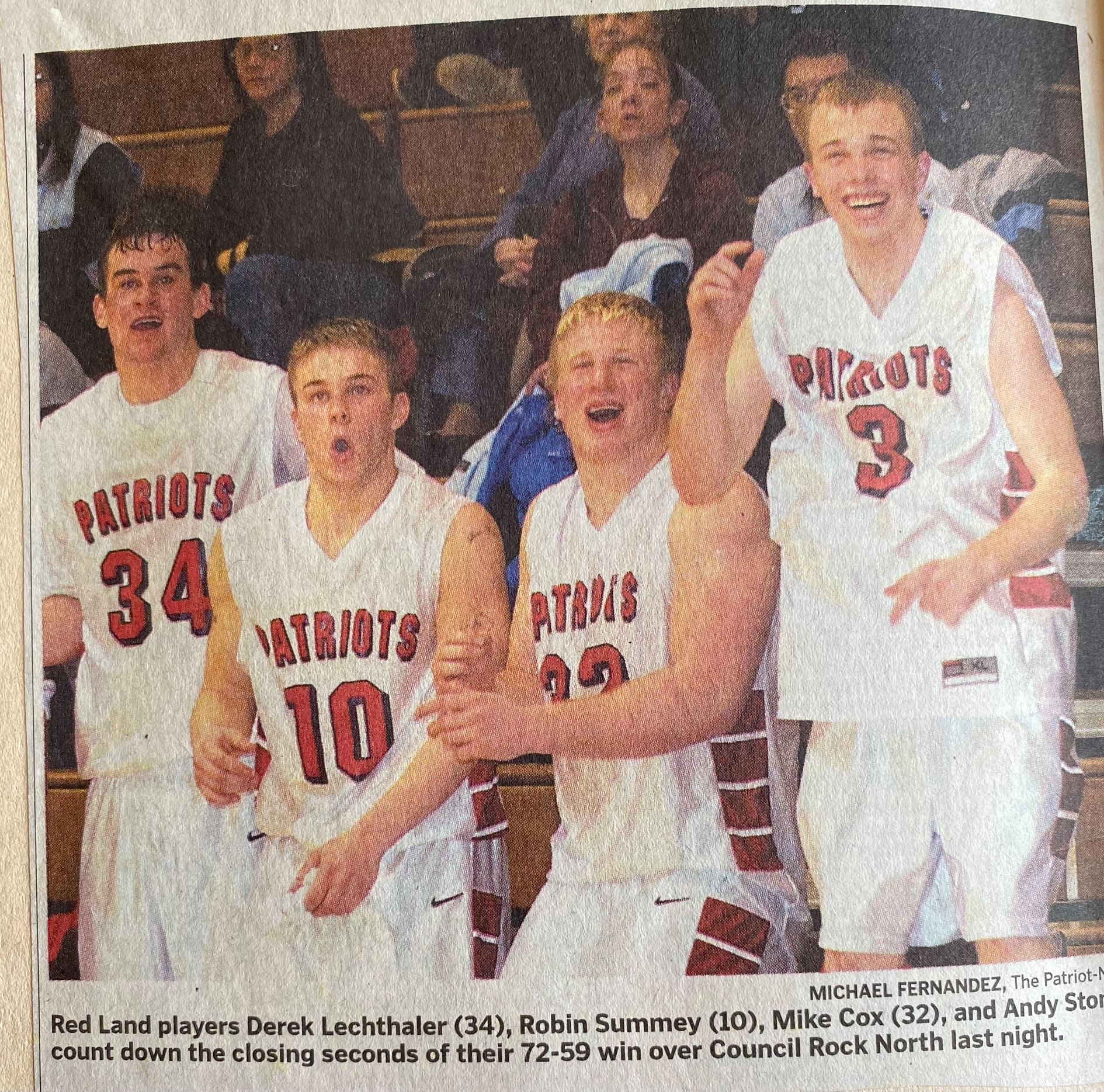