Observe a baseball practice and you'll see the traditional stuff. You'll see hitting, pitching and defense. You'll generally see base running too. But, every now and again you'll catch a glimpse of the dreaded 1st and 3rd scenario. Every baseball coach knows when runners are at 1st and 3rd, the defense is placed in its most vulnerable position. To defend it well, requires strong arms and adroit thinking. To be perfectly truthful, most high school teams are better served spending practice time on the stuff that happens every game. There's simply more return on your investment. Why bother investing hours on a play that is so difficult to defend?

Red Land baseball, over the years, developed a system how to handle these situations. We believed it was the best plan of attack to achieve our overall goal. It wasn't conventional but it served our purpose. It was this system that the players believed in. It's what gave them their moorings when the game became most stressful. Simply rely on the system and whatever the opposing team does is of no significance. We never deviated from the system.

That is, until the Blue Mountain game.

There's a sports cliche that goes like this. "It's not the X's and O's, it's the Jimmy's and Joe's." The idea behind it is the players running the schemes are more important than the schemes. Head Coach Nate Ebbert was about to push his proverbial chips into the middle of the table hoping like crazy that adage was true. But, instead of Jimmy and Joe it would be Jared and Kyle. Nate Ebbert called timeout of a 0-0 game with 2 outs in the bottom of the 4th inning and took the classic deliberate Ebbert stroll to the mound. He had decided that convention wasn't what was needed. Instead, he was going to ask Senior Jared Payne and Junior Kyle Hannon to execute something that required strong arms and adroit thinking. It wasn't something they had practiced all year.

Nate Ebbert: "We didn't have a play on. I went out and told Hannon to read the runner at 3rd. If he didn't break, get the out. If he did break, cut it off and throw home."

KW: (after picking myself off the floor) "Wait. That's what you told them in the state semi-final game?"

NE: (laughter) "Well, when you put it like. That makes it sound crazy."

Junior Luke Wagner (Georgia commit) and Blue Mountain's combo of Nate Nabholz (East Carolina commit) and Drew Grace (Kentucky commit) were locked in a 0-0 game. Blue Mountain's first big opportunity popped up in this eventful bottom of the 4th. With Kaleb Sophy on 3rd and Dylan Biever on 1st, Ebbert strolled back to the dugout and took his place beside longtime Assistant Coach Aaron Walter. Meanwhile, Assistant Coach Teed Wertz was standing on the far other end of the dugout.

Wertz saw something. He believed a "step off" pickoff attempt at 1st base was in order.

This had the potential to derail Ebbert's entire plan. Ebbert addressed Payne and Hannon. He did not address Sophomore Cole Wagner. A pickoff attempt places the ball in the hands of a 1B. But, Wertz and Ebbert coached on instinct. Teed Wertz's instinct saw an opportunity. He motioned for Luke to attempt the pickoff.

Cole Wagner: "I pitched against Cedar Cliff in the district semi-finals and after that my arm was never the same. It always hurt. I never even threw in pre-game infield."

Kyle Wagner: "You're telling me the throw you made in the 4th inning was the 1st time in 2 weeks you turned it loose?"

Cole: "Oh yeah. I hadn't even attempted anything full speed yet. I knew it was going to hurt like hell. But, what choice did I have?"

The average fan saw a pickoff attempt, a picked off runner, a throw home, a tag and an out call. (Video of play in article below).

What I witnessed was a potential season on the brink executed with flawless precision. Luke picked over to Cole. Despite the runner at 1st being picked off, Cole's attention never really ventured far from the runner at 3rd. As he took off Cole threw home. Jared applied the tag at the plate.

You'll often hear coaches say "games never come down to just one play." They'll use this logic to deflect the magnitude of one result or to absolve one particular player from his "failure" of execution. But, history has proven this wrong. Pittsburgh Steeler fans can point to the "Immaculate Reception" and Dodger fans can point to Kirk Gibson's "I don't believe what I just saw" home run. The truth is, single moments do define the outcome of many games.

Kyle Wagner: "What did you think when you saw the sign for the pickoff attempt?"

Luke Wagner: "Are we really doing this?"

Jared Payne: "I think he probably beat the throw but he never got to the plate. He was too deep and I stuck him in the chest before his hand reached the plate."

With momentum securely on Red Land's side, Senior Mason Walker drew a lead off walk and Junior Jaden Henline promptly sacrificed the go ahead run into scoring position. In what turned out to be the theme of the game, Blue Mountain committed one of their 5 errors to move Junior Brock Lightner (pinch running for Walker) to 3rd base with 1 out. Junior DH Jake Cunkle's single plated the first run of the game.

But, Blue Mountain responded promptly with a run of their own in the bottom of the 5th.

At the end of 5, the only thing that was certain was Wagner had reached his pitch count. The Junior southpaw and Red Land Ace would concede the last two innings to his buddy Jaden Henline. Fortunately for Red Land, Henline was peaking at the right time.

In the top of the 6th, Cole Wagner drew a leadoff walk. The brawny 1B swiped a huge bag and danced to 3B as the throw made it's way into the OF. With only 6 outs remaining the Eagles were forced to bring their infield in. Payne capitalized with a base hit through the right side. Red Land 2 Blue Mountain 1.

"If Jaden was our unquestioned #2 (pitcher) we would have brought him in relief against Lower Dauphin and not ( Jr. Adam) Cramer. The truth is we didn't know what we had in Jaden until that first Lampeter game when he was lighting up the radar gun."

Henline, for whatever reason, wasn't sharp until late in the year. But, for a Red Land team without the services of Cole Wagner, Jaden's emergence can't be overstated. Jaden came in the game in the 6th inning throwing very hard with his classic above average slider.

The other thing that you get when Henline is on the mound is the best OF any High School team could want. Cramer in left, Wagner in center and Sophomore Benny Montgomery in right. It was Cramer that would make two diving highlight reel catches that would preserve the 1 run lead heading into the 7th.

If Patriot Nation was nervous they needn't worry. Jaden Henline had been on the big stage before and Jaden would record the last out on a 90+ mph fastball sending the Patriots to State College for their second PIAA State Championship.

Jared Payne recorded the second out of the game by throwing out fellow Kentucky commit Drew Grace trying to steal 2nd base.

The 2 runs Red Land scored were the only 2 allowed by Blue Mountain in the state tournament. Their previous two wins were by shutout.

Speaking of one plays that determine outcomes of games, Adam Cramer knocked starter Nate Nabholz out of the game with a line drive off his pitching arm in the 3rd inning.

Braden Kolmansberger made an unbelievable play to record an out on a mundane fielders choice in the very eventful 4th inning. As Hannon went to his right to field a ball, he threw low to Kolmansberger at 2nd. Braden held the bag in a full extension to record the 2nd out of the inning.

Jaden Henline, earlier in the season, had executed a flawless safety squeeze against East Pennsboro to help win the Mid-Penn Championship. With respect to his sacrifice bunt in the 5th inning, it was "right guy in the right spot."

College teammates were in opposite dugouts during this game. In addition to Payne and Grace, Hannon/Henline and Blue Mountain's Billy Gerlott were all committed to Penn State. 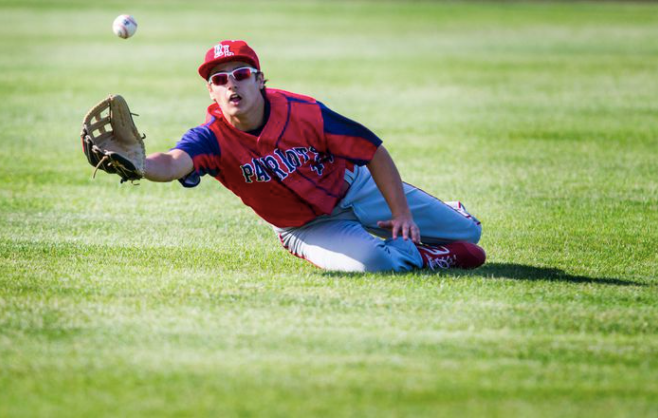 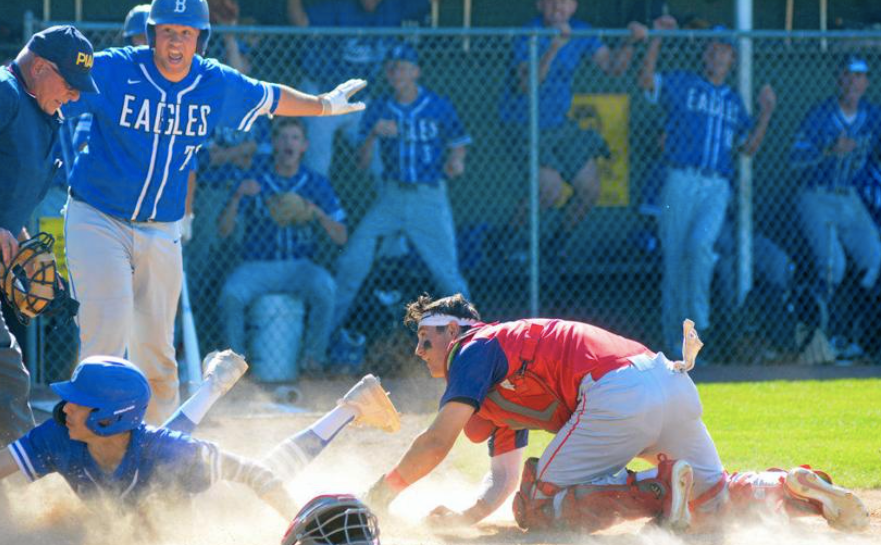 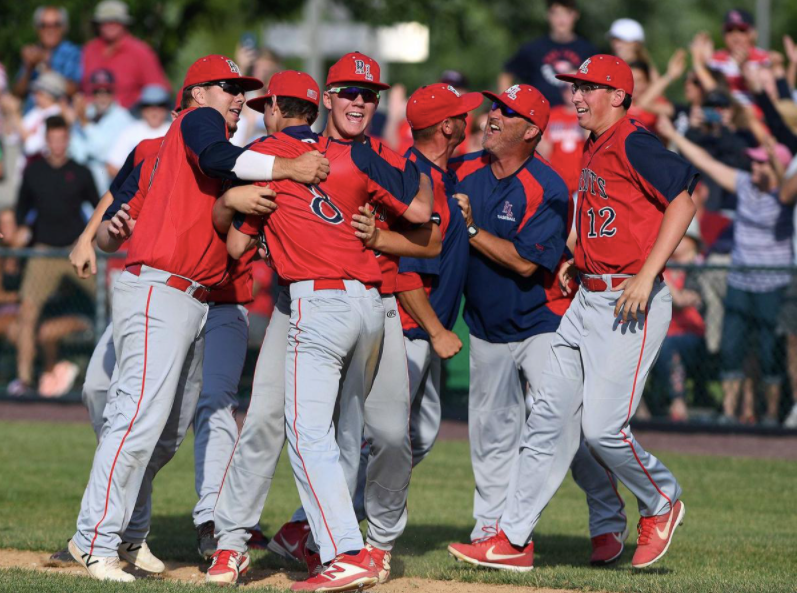